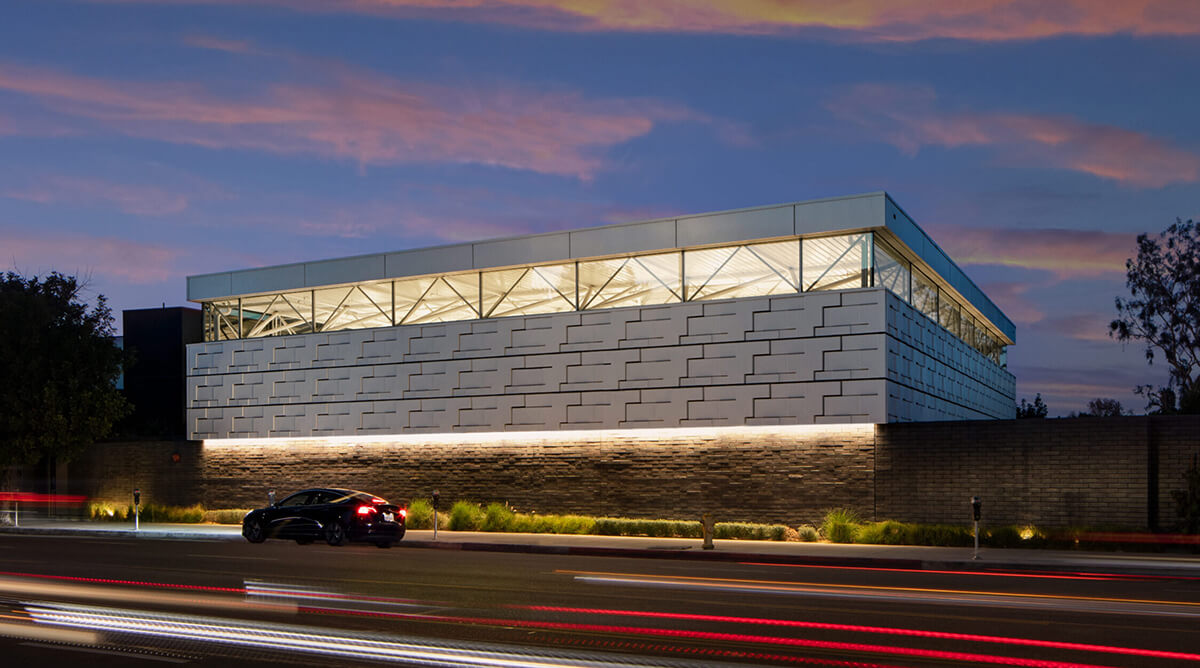 Originally established in 1950, Valley Beth Shalom’s mission is to enrich the lives of their community while fostering personal growth. Mostly untouched since the 1980s, their campus needed a significant overhaul to accommodate the growing number of younger families joining their conservative Jewish community. The new Howard and Irene Community Center is a contemporary extension of their evolving campus.

A nexus within Valley Beth Shalom’s dense urban campus, the Levine Center is a 16-hour-a-day space responding to their previously unmet religious, academic, and athletic needs. The facility provides a new indoor gymnasium and mezzanine level for yoga and other wellness activities. The voluminous space also transforms easily into an auditorium for performances or a sanctuary during high holidays.

The exterior materials are rooted in two primary sources that are prevalent throughout the campus. Four-inch-tall concrete blocks recall the darker hues and proportion of existing multi-tonal brick facades found on the adjacent classroom buildings.

A series of custom-designed 3-Dimensional fiber-reinforced polymer panels that clip onto the CMU wall are an abstraction of existing 3-D brick found on campus. In addition to acting as a rain screen and improving the building’s thermal performance, the custom panels create a living façade showcasing the interplay of light and shadow.

Creating a large, daylit space that supports multiple uses while adhering to stringent California seismic codes was one of the most significant challenges. To accomplish this, the designer modeled a complex space frame system spanning the entire building volume. The triangulated members allow for a continuous clerestory around the perimeter of the building while maintaining the structural diaphragm. Triangular pop-up windows introduce additional lighting from the north thus mitigating glare.

To maintain the floating ceiling’s delicate appearance, the heating and air conditioning ductwork is integrated beneath the mezzanine level. Vents set into a Baltic birch faced ledge provide the velocity needed to force air deep into space. Sliding glass storefront at the east and west facades allow for indoor/outdoor connections and create ample cross-ventilation. From the outside, the structure appears perched atop the concrete block wall. New landscaping and lighting activate the public realm along the long site wall.

The Rosen Library, located on the lower level of the Levine Community Center, immerses young readers in a series of playfully designed areas. In addition to sound-masking techniques used on the basketball court located on the next level above, acoustical baffling within the ceiling creates visual interest while eliminating any remaining acoustical intrusions such as the thump of basketballs or the shuffling of chairs.

Within the basement space, a sense of warmth comes from artificial lighting, color, and material. The layout takes inspiration from the hexagon, which is also the geometric origin of the Star of David.

The space is designed for children of all ages and includes reading nooks, vibrant learning niche’s, and story-time alcoves. The furnishings are bright and child-oriented. Variations of soft seating and transformable book-shelving can move throughout the distinct areas depending on VBS’s needs. 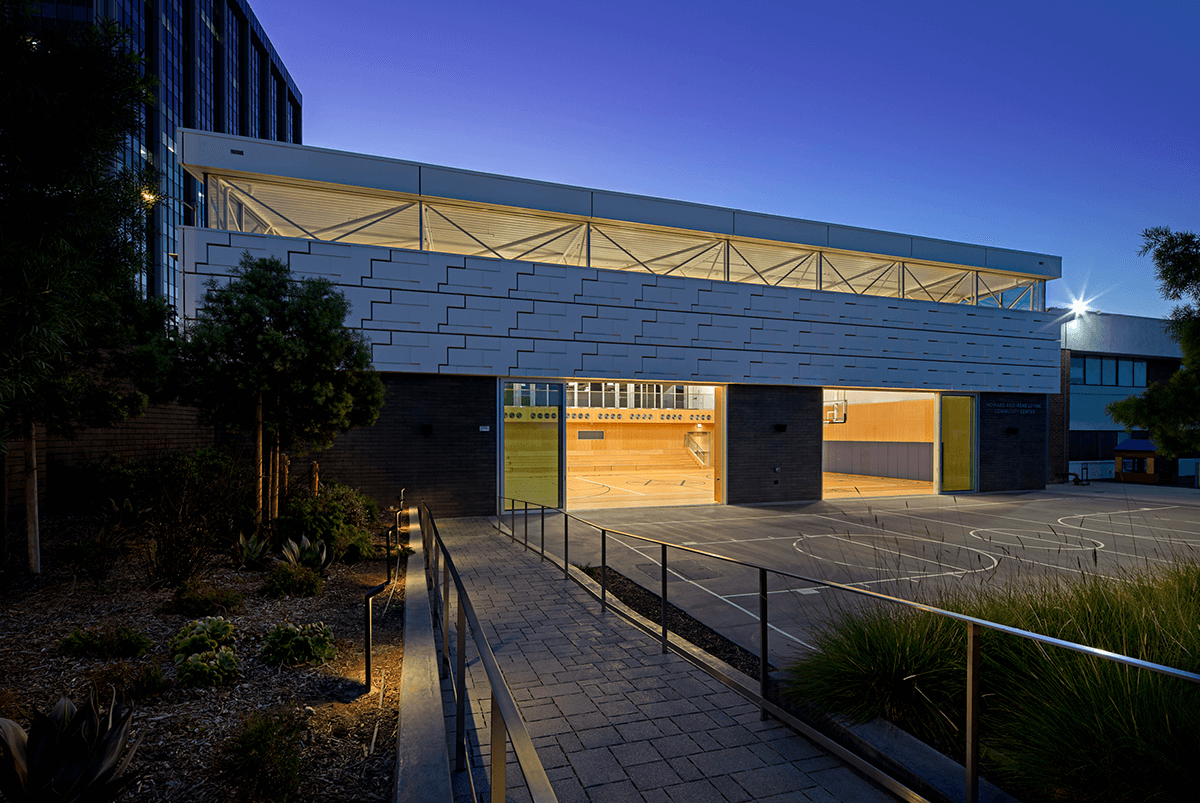 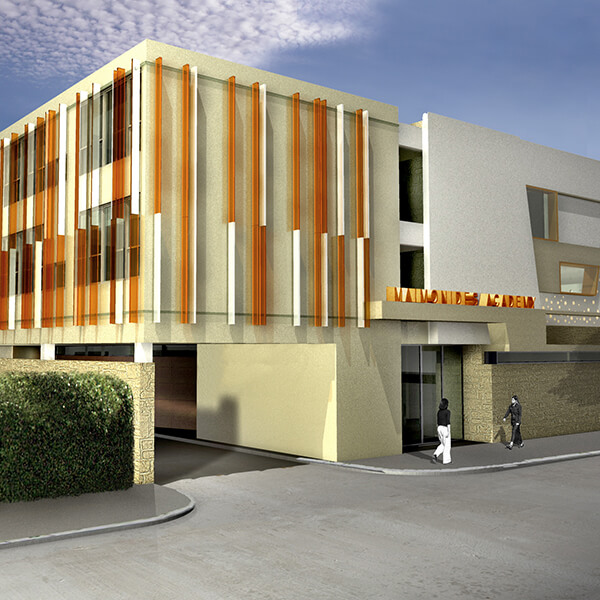 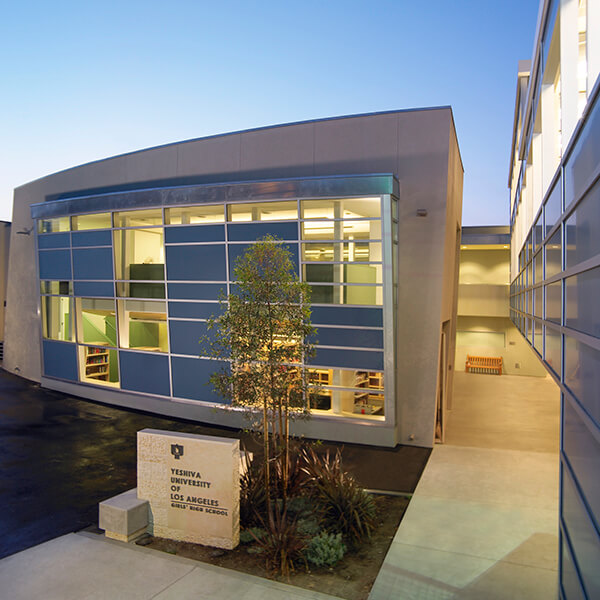 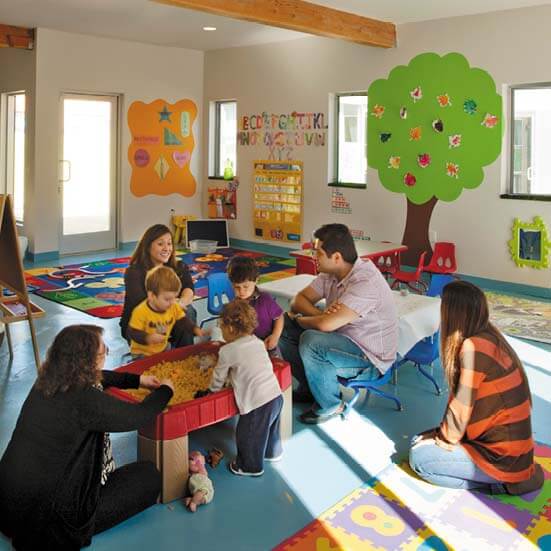 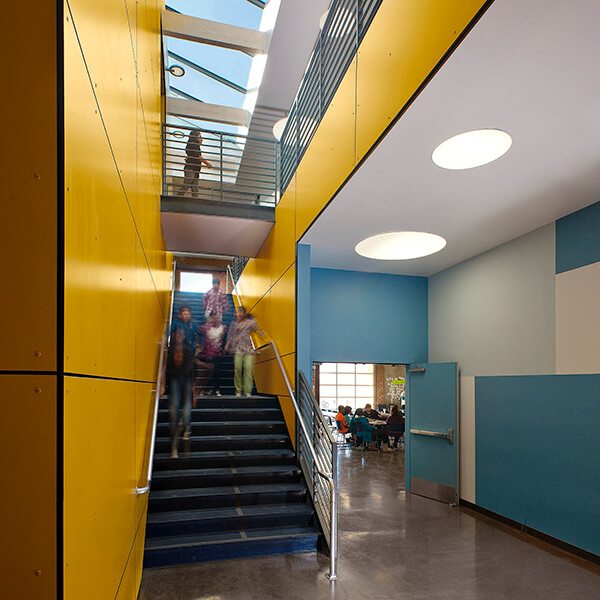